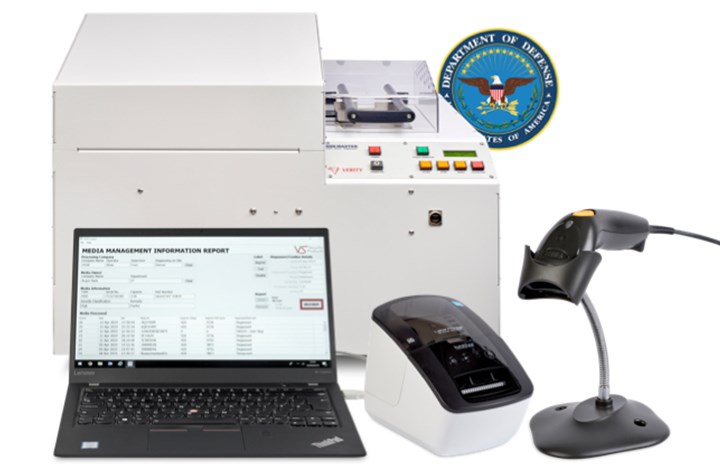 The SDD Master is an NSA certified degausser data sanitisation system with a high energy, pulse discharge hard drive eraser that is designed to offer complete and secure erasure of magnetic media to the very highest level. Generating the strongest magnetic field of any degausser on the market, the SDD Master’s unique triple erase process, ensures complete data erasure every time. Where security is of the utmost importance, the Verity SDD Master should be your degausser of choice – that’s why it’s an NSA approved degausser, favoured by government and security departments around the world.

The SDD Master degausser is fitted with the unique Data Destruction Auditor which enables you to document and verify your hard drive sanitization/erasure and create data protection audit-ready reports. The SDD Master NSA approved self-calibrating degausser provides the user with assured erasure time after time.

The SDD Master is a fully automatic degausser. Lift the perspex lid, insert the media into the caddie, close the lid and press the 'Start' button on the control panel. Media is transported into the degausser where the magnetic field is activated by a powerful pulse discharge. While inside the degausser, media is automatically rotated and a further two magnetic discharges are applied, ensuring complete erasure. The entire process takes approximately 75 seconds.

The processor controlled SDD Master continuously monitors the operation ensuring that the erasure cycle is completed. The operator is immediately alerted to any interruptions in the erasure cycle on the LCD control panel.

Copyright © 2021 Advanced Technology Distributors Pty Ltd. All Rights Reserved.
All logo's, trademarks and texts displayed on this site remain the property of their registered owners.